This was the first Reading Hasler for many years that chief man, Brian, was not at the helm, though he’d done a fair bit of the legwork before he’d left. Instead we had Amber and Paul Owen running the show, along with Evan and a team of ever-willing volunteers. 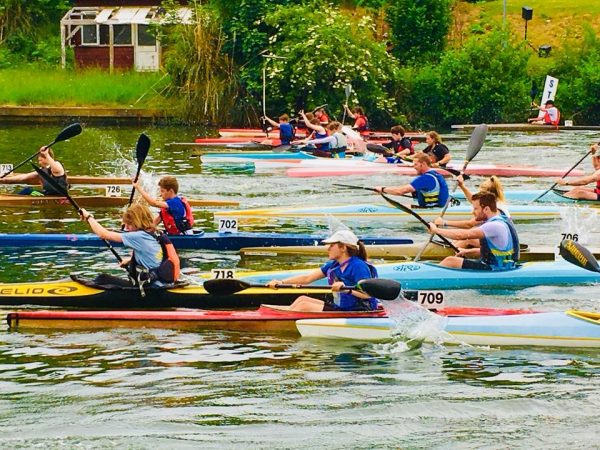 Despite threats of torrential rain and, more worrying, lightning and thunder, none materialised and it was a hot day. We had 161 K1 entries, including 15 lightnings, and 48 K2s from a total of 31 clubs. Those clubs spanned the country from Pennines up north to Swansea west and Norwich to the east. 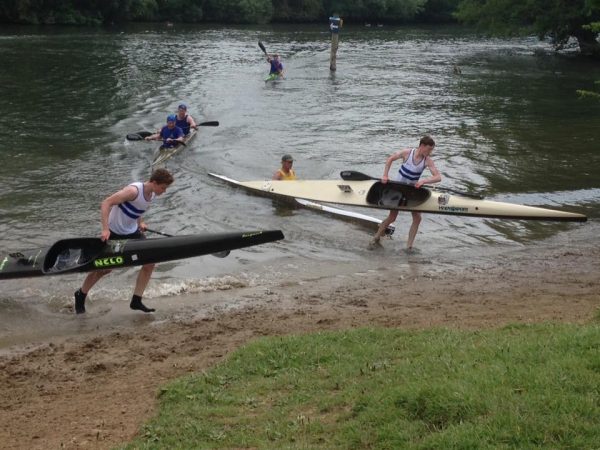 There was some great racing, close finishes and ten podium places for RCC. Great point scoring from all, particularly our juniors. Special mention to Noah for his first lightning race (20 points), Rory and Alex taking 1st and 2nd Div4 K1, Peter Skinner taking 2nd and Charlie 4th in U12s. In K2, Sam and Fran won 1st in Div 4 K2 and Thomas and Joseph took 1st in Div 6, winning a probable double promotion. 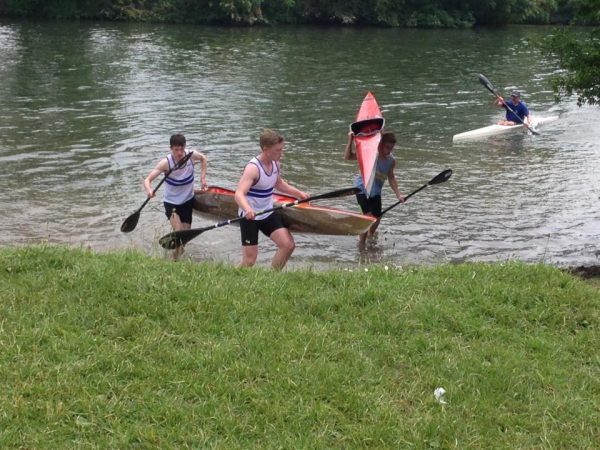 Seniors on the podium included Matt Clarke (3rd in Div6 K1), Kat and Rachel Fort (3rd in Div5 K2) with Nigel and Timi just behind them, and Chris B and Tant 3rd in Div 6 K2. The total tally of points gave Reading 2nd overall out of the 31 clubs attending. Great RCC team work, Go Team Reading! 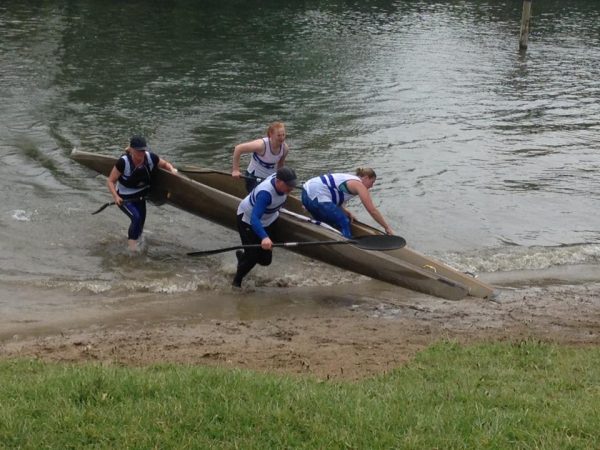 A big thank you to all volunteers for helping to make the day run very smoothly – an encouraging pre-cursor to the Nationals coming up soon in July. 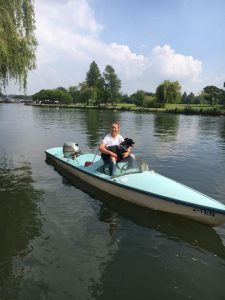 A very enjoyable weekend of racing at Nottingham. Lovely to see three new members to the RCC sprint team – Rachel Nelson and Sam Hill putting in gutsy performances in K1 and crew boats and Tant Hill in the Masters crew boats. 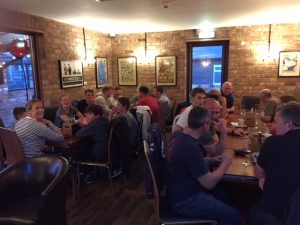 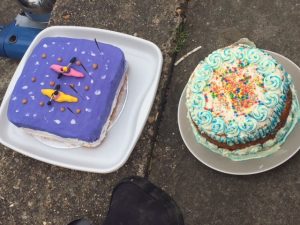 Great racing at every level – lightning, junior, Senior and Masters, with a haul of eight medals. Most from the Ladies(!), with bronze from Tant Hill and Chris Boonham in K2 1000m. Big well done there. Sorry no pic! Congratulations go to Silke, in particular, with her three medals in the Over 34 Women’s Masters – a Gold for 200m K1, Silver for 500m K1 and another Silver for the 500m K4, along with Vicky ES, Miriam and Debbie A. 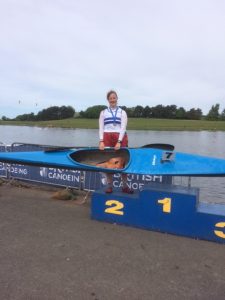 Happy Birthday to Rachel for the Saturday and Miriam for the Friday, plus thanks to Immi and Miriam Mims Graham for delicious cakes. And to support crews for all the behind the scenes assistance.

All these weeks of snow, wind, rain and the April regatta managed to land on the one sunny weekend. Weren’t we lucky. A glorious sunny Saturday and pleasant Sunday, and most importantly minimal wind. Amazing!

We were a neat team of 10 paddlers, with the Juniors dominating this regatta. There was some terrific racing. Stand out was Fran – 2nd in her 200m K1 and 1st in both her 500m K1 and K4. Lili, her first regatta in Girls C, was also a winner in that terrific K4, as well as winning a 3rd and a 4th place in her 500m and 200m K2 with Jessie from Banbury. 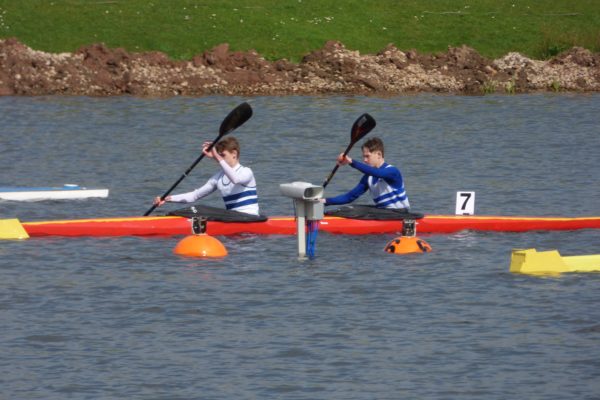 Dan and Fred were vying in Boys A/B K1 200m. So close, Dan winning it by 0.29 secs, so that was Reading 1st and 2nd. Dan was also 3rd in his 500m K1. Their K4 selection race was a heart stopper, so so close and just beaten by the other squad boat. So all to play for at the K1 European selection day on April 28th. 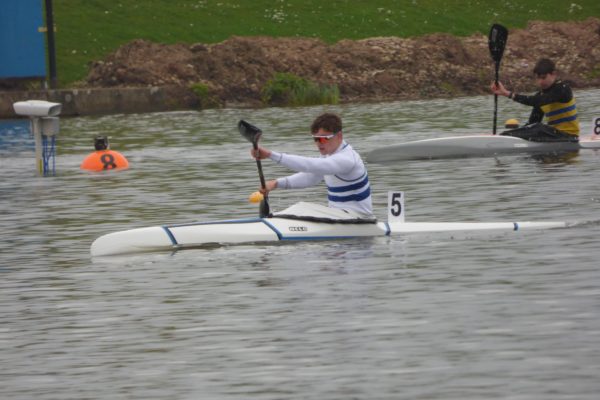 It was great to see Lee, Silke and Vicky ES on the water, racing, Silke gaining 5th in K1 200m and Silke with Vicky winning 2nd in their 200m K2. I know we’ll see many more Reading Masters at the May regatta. 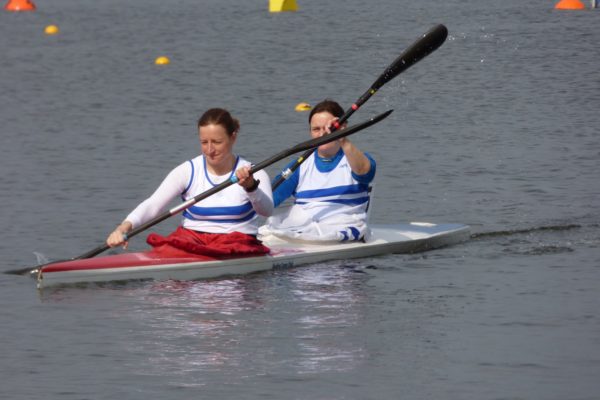 And Jim had an amazing weekend of racing. He was up against all the top men in the country and reached finals for all his K1s and was 5th in his 200m K2 with Spencer Armstrong.

Well done to you all. And thank you to the great support crews, too.

Through the night the rain poured and the wind howled, but come the morning of Thameside 1, skies were blue and the sun shone. Thankfully, as it just took the edge off freezing temperatures.

50 K1s and 65 K2s took to the Kennet Canal over the next two hours and raced the 12 miles and 12 portages (or 14 if you didn’t squeeze under the low bridges) back to Reading Canoe Club. We were very lucky with the racing conditions – the aforementioned sunshine, plus a handy tail wind which only occasionally became a cross wind! That was until the Thames. Upstream against 40mph winds was not pleasant even for the hardiest crews.

Great organisation from Dan S and his team. It all worked like clockwork. There were a handful of Reading crews among the entries, most notably Nigel with Annabel/Bruno (half and half) and Tant Hill with son Sam, who came 2nd and 3rd respectively in Junior Vets, Jim who came 2nd in K2 mixed, and Alex Tonkin and Sam Betts who came 5th and 8th in a tough field of Junior Men K1.

We were a small team at July’s Nottingham regatta – six Juniors, three Seniors and two Masters – but judging from the results, all were in top form. And that’s despite it all those school exams.

Lilli stormed the final of K1 500m Girls D, taking 1st, and, racing K2 for the first time with Jesse from Banbury, was 2nd in their K2 500m final. Well done to Lilli – she has gained promotion to Girls C.

Fran, for the first time in Girls C, raced well in her K1s and won both her K2 races 200m and 500m with Molly from Norwich.

Dan A was racing really well in Boys A, getting into A Finals for all his K1 races. He and Jim looked really strong in Men’s A/B K2 500m.

Fred was on form with an impressive two-boat length lead in his 1000m Boys A K1 final (B), and with an impressive time. He was 3rd in his 200m final, missing 2nd by .05 sec. That close! His favourite race was K2 200m with RLS’s Alex, with a very convincing win, 3 seconds faster than the next nearest boat.

Both Dan and Fred raced together in a K4 they’d put together with Ealing and Richmond. Their 1000m, last race of the day, was uplifting to watch, with their crew totally in command, ‘sailing’ past the rest of the field and finishing with at least a two-boat length lead.

Great to have Neil Barton racing for Reading, taking 3rd in his K1 200m final Men’s B, not his usual distance at all!

All got to their races on time, albeit with a couple of numbers missing. A number-nicker was at large – no kidding! A great racing weekend.

Over the past few weekends the Reading slalom section have tried their skills on moving water! Emily, Natalie and dad Andy Neville went to Cardington. Emily put in a strong run and gained a promotion to Division 3 with a second place. Andy did very well in his first Division 3 race winning the event, commenting, “I managed to win but not by much and against such small kids – they are so fast!’

Last Saturday 6 paddlers competed at Shepperton and experienced their first weir slalom. With the noise and flow of water from the weir, our paddlers were quickly out of their comfort zone. With grit determination and after many swims, they made big improvements in their water skills. 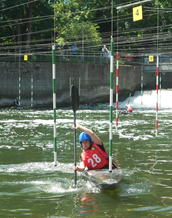 Alex Tonkin recorded a good run at his first ever slalom beating many paddlers from the higher division and gaining promotion to Division 3. Also, after much practice and a few swims, Duncan Edwards achieved a fast final run to win the Division 3 competition. 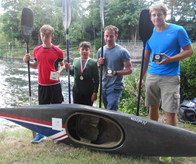 All must be commended on their perseverance on new and challenging water conditions. Special mention to Peter Skinner who even after 8 or more capsizes never gave up and received Best under 12 in Div4!

We had a smaller team at June Interclubs regatta this year, just 26 paddlers in all, but some great results. Reading CC finished 5th out of 55 clubs and only 27 points behind the winner, Richmond. Below are some highlights of the weekend.

First off, great performance from the weather – bright and sunny with increasing winds, but not a dreadful gale … like the very wet and gusty following two days.

Here are some highlights of the results:

Great to see Annabel and Phoebe both back on the water racing.

Rachel Spanton, Silke, Nathan Betts and Jim Towell were all new to Nottingham sprints and took to it with gusto. Silke used to sprint for the National German team, so she seemed to feel very much at home.

Well done to you all – a great team and finishing 5th out of 55 clubs with just 26 paddlers is a great achievement. 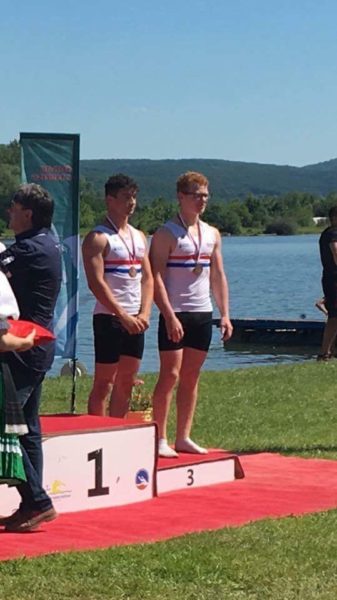 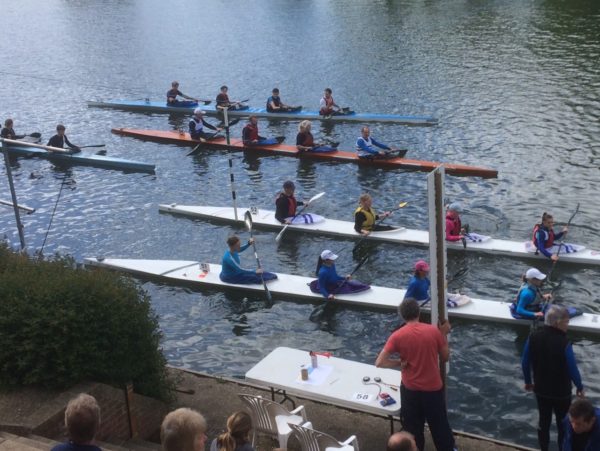 Congratulations to the Reading Slalom paddlers for their success at Winchester Slalom on 14th May. Ten Reading paddlers competed in their very first slalom against other division 4 paddlers. Competition was fierce. Many of ours achieved clean, fast runs posting excellent times.  Everybody deserves to be very proud of themselves for giving their best on the day.

Success was also achieved in a wave hopper competition – 750 metre dash down the river resulting in a 1st for Duncan Edwards and awards to Marc Gutteridge and Andy Field. Maybe more WWR racing in the future? 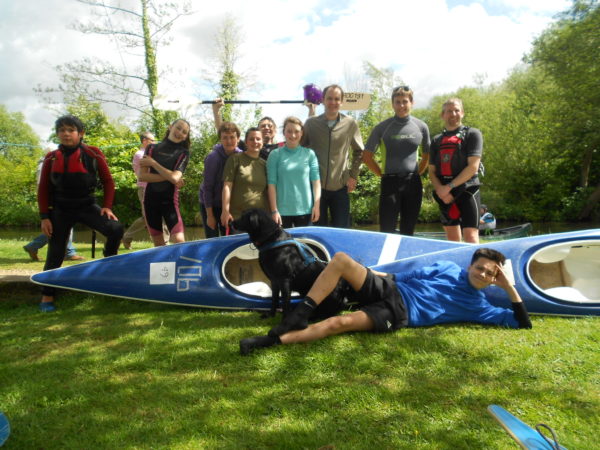 Here’s to an incredible achievement from all, well done!!