The wettest picnic paddle for years but being hardy RCC members no one was put off. It was nice to have some new faces join us, including baby Peter who at only 6 months old was certainly the youngest.

For the annual picnic paddle we rest our racing boats and use Canadian canoes instead.

The boats were towed upstream to Pangbourne by Brian and Marc at the crack of dawn, navigating the lock meaning we had an easy paddle back down stream to the club with some fun and games along the way. 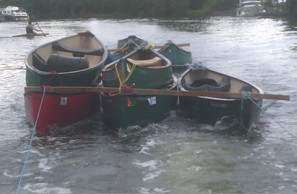 Due to the weather we had a shorter lunch break than usual. The cows came to investigate who these wet bedraggled people were and why they were sitting in the field eating their lunch in the rain.

As we were already wet through we skipped the usual ‘sink a boat by filling it with children’ and standing on Nigel’s shoulders to jump in the river games. Brian did not get a post lunch nap and I do not think anyone even had an ice cream this year BUT we did set a new record for the fastest picnic paddle. We set off at 11 a.m and the first boat was back at 2.15 p.m.

It was wet but it was still a good day out with lots of fun and laughter. Thanks to Nigel for arranging, Brian and Marc for transporting the boats and to everyone who came despite the weather and helped make it fun. Oh, did I mention it rained!