When Rohan first suggested she may do the DW race I thought she was a bit over optimistic. She last did any real long distance paddling more than 15 years previous, and had spent the previous year recovering from a bad leg break after a skiing accident. I didn’t really give it much more thought until she went out and bought a K1 and entered the Waterside Series. 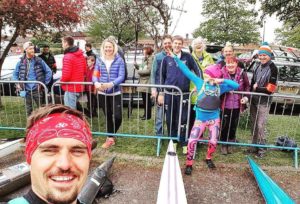 Her motivation was strong, she was paddling for a cause close to her heart, ‘Macmillan Cancer Support’ She started putting the miles in over the winter months, paddling from Gailey Canoe Club, with the occasional weekend down at Reading.

Waterside A arrived, we collected Rohan in Billy’s car. She then questioned whether mechanically it would be up to the job!! I don’t think at this point in time Billy actually realised what was involved in being a supporter for DW. The Watersides were to be our test….were we up to the job.

I quietly told him to ignore everything said to him from Rohan, and any other paddler during the race, and to watch his fingers if feeding. He was given the job of driver and chief cameraman, I planned on leading him into the feeding part gently. We got her to the start, and off she went. I then informed Billy now it was a cat and mouse game to the end and we’d best get going.

It was then a battle of wits to find the short cuts and parking places, close enough to each lock, stuff your pockets with jelly babies, bits of crumbling flapjack and the odd gel, and spare fluids…then run, hopefully beating her to each portage before she arrived. Run alongside her, shoving bits of food in her mouth (watching out for the teeth), then giving her a squirt of fluids as she put back in….remembering not to squirt too hard as I did once and covered her in some sticky green energy concoction. Then back to the car to repeat the process as many times as you could along the course.

As a rule, support is not usually needed for the first couple of Waterside races, but it was a chance for us as support crew to learn where to go, and what Rohan’s preferences were.

Waterside A was dully completed, support went well, filming went even better and to cap it all Rohan put in a really good time and secured second place lady K1.

Buoyed up by this success, DW entries opened and Rohan was the first to get her entry in. I was still a little sceptical as she’d only just completed a 13.5 mile race, the first time in 15 years….DW is 125 miles!! Being the dutiful supporter, I then downloaded every rule, portage diagram, driving instructions that was downloadable off the DW website, and started to digest the information.

Waterside B was the next race in the series, being a down and back from Newbury to Aldermaston and back, supporting can become a bit tricky as the portages get a bit congested. Rohan’s partner, Chris, joined us this time, so we could ‘trial’ him out for the ‘big’ event at Easter. He was given his share of jelly babies and crumbling flapjack, and also warned about the ‘teeth’ This was a particularly hard race with some rather nasty gusts, proving quite tiring on many of the paddlers. Again Rohan secured a very respectable second ladies place.

The following race continued in much the same way, however Waterside C was a bit of a surprise when I informed him we’d have to park at the road bridge at Crofton flights, and make our way up to the first lock….then, when she arrived we’d have to run the whole length with her. Having walked to the top lock, Billy asked the question how far did we have to run….only about a mile or so I told him, whilst feeding her on route. Running was another aspect of the support role he hadn’t bargained for.

After a dose of campylobacter affecting Rohan for the previous two weeks, Waterside D loomed. The enormity of what she’d agreed to do was huge, as she prepared herself for what would be the longest she had ever paddled before. She had the support of other Reading paddlers around her on the water, which ate up the miles on the long initial pound section, before arriving at known territory covered in previous races. We had now got the driving, feeding and running going well now, and incorporated the second car of Chris (who had survived and passed his trial at WsB) and Duncan, that would be part of her DW support into this last race.

Waterside D completed, and a first place in the bag, giving her the overall Series win, and the confidence that the distance was achievable. She now had 10 days to let her body, and her blisters recover before the big day.

In the background, as supporters we reassessed time schedules, prepared items for the compulsory survival bag, planned maps and parking areas that each support would aim to get to. Rohan set up a facebook group, so we could communicate with each other. During this time Rohan had been giving some advice to another female paddler Anna Stishova, who was quite novice to paddling, and was also attempting to complete DW. Rohan decided to invite Anna to stay with her for the duration of the race, I was a little anxious about this as I didn’t want anything to distract Rohan from her own race. As it was, my fears were ungrounded and Anna proved to be an excellent house guest and a much needed distraction from the nerves and stresses of the race. It was also a great test to Rohan and Chris’ relationship as he now had two hungry paddlers to feed and two sets of paddling kit to wash and dry at the end of each day. This part isn’t covered in the downloadable help files on the DW website!!

Day one of DW arrived, each car was allocated wet wipes, supporters food, Rohan’s food (under no circumstances were we to mix them!) and hand gel….she did not want a repeat of the campylobacter incident. Devizes takes on an almost festival party mood for the start, the competitors are anxious to get going, many have spent the previous 6 months or more training for this day. Kit checks, completed, trackers fitted and the paddlers start to get on the water, depending on how long they think they’ll do. Many will seek out a compatible paddler to paddle alongside for the initial long pound section.

And she’s off, finding out fellow Reading / Pangbourne paddler Conor Macnab to accompany her along the pound. Our months of running up and down the canal tow path were paying off, communications via each support vehicle and the facebook group worked well, timings were on schedule, even including the two unexpected swims.

Day one completed, Devizes to Newbury (34miles), Rohan was then collected, stripped off in a local car park, warmed with soup and taken home to be scrubbed, fed properly and put back together by Nico Kirschstein, ready for Day two.

Unfortunately she was 22/73 in the K1 field, and so therefore didn’t make the timed starts. She was the fastest boat in the batch starts.

Day two, Newbury to Marlow (36 miles). A bad judgement call on our behalf, we thought setting off as late as she could would allow the slower boats in front to spread out a bit. Didn’t quite go to plan, and she endured a lot of queuing at portages from Theale until quite a way down the Thames. Day two completed a little down on time due to the hold ups, but still a healthy lead over the next K1 lady, however still in 22nd place cumulatively, even though she’d beaten a number of faster boats from the previous day. Back home to a repeat scrubbing, feeding putting back together and blister popping session.

Day three, Marlow to Ham (38 miles). As support crew, we decided on a change of plan and got her on the water as soon as possible within her start batch. That way, hopefully, she’d just have 78 boats to fight though, rather than the 160 from the previous day. This plan worked really well, with her passing the last of the slower K2’s after 28 miles, just as Ali Little from Pangbourne caught up. This provided each with some company for the last 10 miles in to Ham, where she arrived to a rendition of Happy Birthday. Ali thought it was poetic justice that he beat her on her birthday, as she beat him on his at Waterside D, she had now increased her position to 20th place K1, and a 50 minute lead over the next K1 lady. This stretch of water had us, as supporters on slightly unknown territory, and we were now relying on downloaded maps and pictures of places to park, both obtained from the DW websites and diehard DW paddlers and supporters Paul Toomey and Tamsin Phipps.

Day four (Ham to Westminster Bridge, 17 miles). Many believe that once a paddler reaches this point that the last day is easy and a foregone conclusion of completion…I know better!! Having paddled down the tideway, I know how choppy it can get, and I decided that as we couldn’t support Rohan with feeding on this stretch that we would cycle alongside her. Billy was initially a bit daunted by this task, having not been on his bike for over a year. Bikes were checked over, and transported into Ham by Tamsin, saving us the need to have to then cycle the 17 miles back to Ham!

The first part of the tideway up to Putney Bridge is quite pleasant and leafy, and a nice group of 6 paddlers were working together. A nasty bit of chop from a passing boat broke the group up after Putney Bridge, and Rohan found herself alongside Ali Little once again. At this point in time the race positions, saving a capsize, are almost decided, so with a healthy lead over the next K1 lady, Rohan decided it was better to have the company of another paddler along this daunting stretch of the Thames, so they finished the race looking out for one another for the final push to Westminster Bridge.

Boats and paddlers are carried out at the steps by St Thomas’ hospital, hugs given, tears shed…before receiving that well-earned medal from the Mayor. Paddlers are then changed, warmed and fed, before being transported home for a long rest…We as supporters can now empty our pockets of flapjack crumbs, and find all the missing jelly babies from between the car seats, and re set our body clocks to normal daytime hours. 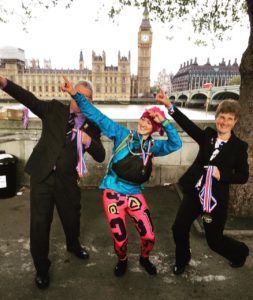 Unfortunately Anna did not complete her DW attempt, being pulled off at Marlow as she was beyond the 10 hour time. She did follow us as we supported Rohan for the rest of the race, to gain some perspective form a supporter’s role. In her words, ‘you can’t have an inexperienced paddler without an experienced support crew’.

Anna learned from first hand, that for every successful DW paddler, there is normally an army of supporters working in the background to ensure things go as smoothly as possible to enable that paddler to complete their dream of paddling under Westminster Bridge.