The Frank Luzmore Marathon is being held on Sunday 3rd January 2016. It is a K2 race of 12 miles and 3 portages from Elmbridge to Richmond. Starts are grouped into different classes.

The Stour Descent race is being held on Sunday 6th December 2015. It is a 13.5 mile race down the River Stour in time trial format. It includes one optional shoot, one obligatory shoot, and a compulsory portage. Plus anything else the conditions throw in, including sharp turns, shallows, trees, and more! It makes a great first descent race for those who have not done one before.

The Ross Warland Memorial Relay Canal Challenge is being held by Banbury Canoe Club on Sunday 29th November. The race is held in memory of Ross Warland who died of bone cancer at the age of 21. The course is 20 miles with 12 portages, run as a time trial. It is along a similar stretch of the canal to the recent Banbury Hasler race. For those that don’t want to do the full 20 miles there is an option to split it up into a relay.

The Charles Hick Canal Challenge run by Basingstoke Canal Canoe Club will be held on Sunday 22nd November 2015. It is a 16.6 mile race with 2 portages, which is run as a time trial. It can be done as a relay by inexperienced crews. There is also the option of a 6 mile event to encourage beginners and inexperienced juniors to try winter time trials. Pre-entries only by Wednesday 18th November – no entry on the day.

Leighton Buzzard Canoe Club’s Remembrance Marathon is on Sunday 8th November 2015 on the Grand Union Canal. It is 15 miles and includes 4 portages. There will be 3 classes for each type of boat, based on paddler marathon division ranking.

The Banbury Hasler race is being held on 25th October 2015, the day after Reading Canoe Club’s AGM. Sign up sheets for the Banbury race are up on the board. This is the last chance for a Hasler race before the winter. It’s a very different bit of water to most of the other races in our region so a great chance to experience a slightly different event. Please sign up on the board at the club.

There is a women and girls only crew boat training day being held at Reading Canoe Club at the end of October. Contact Dan Golder at British Canoeing if you have any questions.

The event was held in a town called Bouchemain near Angers on the River Maine near its confluence with the River Loire.

A team of 14 juniors travelled with 4 coaches to the event including Fred Kemp and ex Reading paddler Hasfer Kabeer. The object of the trip is to show the juniors what it is like racing away from home friends and parents etc. All the GB juniors taken are top paddlers in their age group in the UK, so generally above the average standard of the French paddlers in their age group at this event. However, so as to make the race more challenging all of the GB juniors are entered into the age class above what they would paddle in the UK. None of the juniors are expected to win, or win easily, but to experience racing with foreign paddlers etc.

The format of the racing is similar to the UK Championships with K2 racing one day and K1 racing the next with courses of 15km or 20km and two or three portages.

The course was an upstream start with a 500m sprint to go under and fairly narrow bridge arch before joining the course proper. Then onto laps of around 5km with a portage at the end of each lap going almost immediately into the bottom turn.

The river at Bouchemaine is quite wide compared to most English rivers and capable holding starts of 70 plus paddlers without taking up the entire width of the river. However paddlers on the far left certainly had their work cut out for them against those that started on the right. There was some flow on the river, but not too much. But there was an increasing headwind over the weekend on the upstream section making parts of the course choppy.

Fred raced K2 with a boy called Timmy Dowden from RLS in the under 16s event. There were 26 boats in their start. From the start of the race the boys were in the lead group and seemed quite comfortable. The two pictures below shows how well they started. The pictures are taken 7 seconds apart! Fred is in the back of the yellow boat on the left. 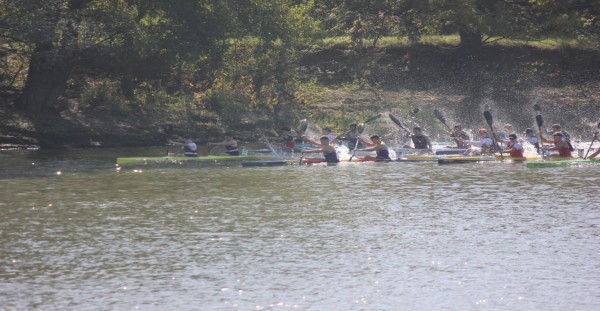 Portaging at this level is fast and furious. The portage itself was onto a pontoon only capable of taking 2 K2s per side, and one side being particularly difficult to come into at speed. Missing the pontoon or misjudging it meant a sort of beach portage which needed some care! Fred and Timmy portaged well although missing the pontoon on the first lap and sprinted away with the lead boat each time causing the remaining French to chase hard and reducing the group at each portage.

The following pictures shows the boys in the lead group approaching the portage and deciding that only the far side had space. 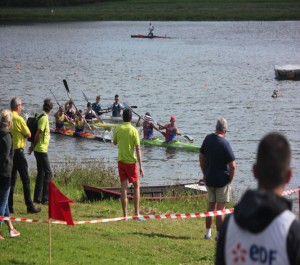 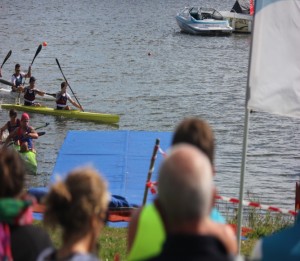 Missing the pontoon and doing a beach portage, but still being with the lead boat at the other end of the portage! 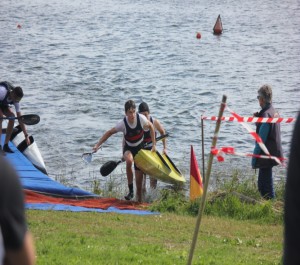 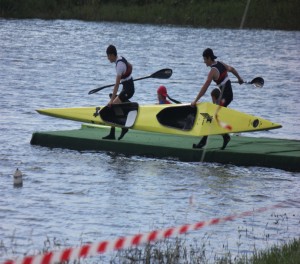 The boys eventually lapped the girls… That’s Hafsa waiting to put her boat in! Around another lap and to the finish! 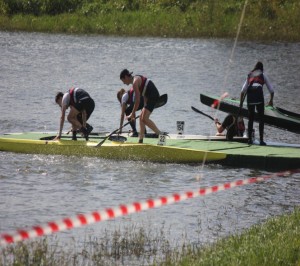 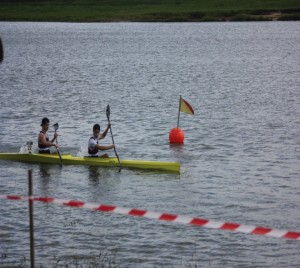 Fred and Timmy finished a very credible 2nd. To the credit of the French organisation there were two prize giving ceremonies, one International and one French Championship, unlike a couple of years ago when the British only walked away with the knowledge of beating the French!

On the Sunday Fred and Timmy were out again but racing each other and 57 other boys.
Fred coming into and out of the first portage. 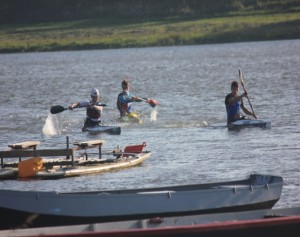 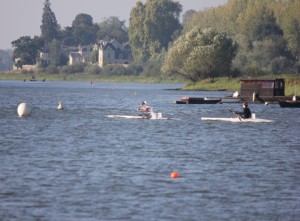 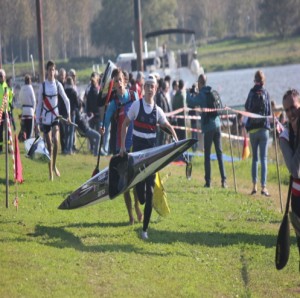 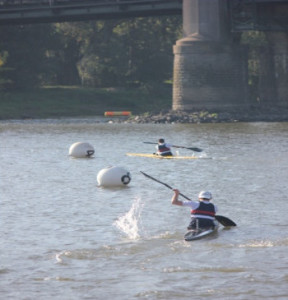 Finishing with Timmy, 2:57 behind the winner. 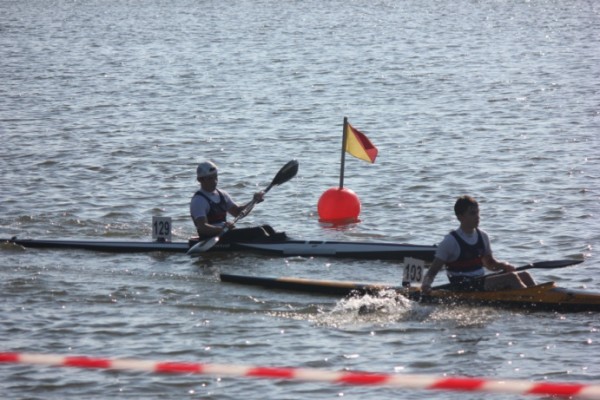